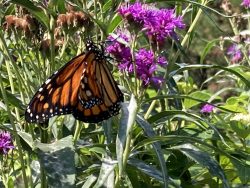 These past few weeks there has been is a good-size slash of deep purple on the backside of a section of split-rail fence in my backyard.  My brother Tom would have described the color as ‘passionate purple’.  The vocal color will stand out for a couple of more weeks before the flowers dry back and seed out.  The patch of iron weed, the most enduring success I have had in cultivating some native pollinators, has been gracing us with its persistence for most of the 31 years we have lived here.

When a plant has the term “weed” as part of its name, it would seem like something that should not be encouraged in your garden.  I would argue that iron weed is a wonderful exception to the rule.  The term weed conjures up two reactions: the first is that the plant must be obnoxious for some reason and therefore must be eliminated by any means necessary; the second is that anything not intentionally developed by a person in a green house is certainly a “lessor-than”.  Both reactions are quite mistaken in terms of iron weed.

The plant is a holdover from the days when big prairie held claim to much of the upper Midwest.  That is evident in its height.  The plants in my yard stand a full 6-7 feet tall.  That the plant can still be found when the big prairie has long been paved and farmed over is a testament to tenacity.  If you think it is strange to refer to a flower as tenacious, you have probably not ever seen a dandelion growing right up through a blacktop road.

I think that both its height and the brightness of its flowers make it a beacon – kind of like a floral lighthouse, that signals to nectar-loving insects.  I went over to take the picture that accompanies this essay on a recent afternoon shortly after the sun broke through what had been a cloudy and gloomy day.  In a short ten-minute span, I counted two swallow tail butterflies, three monarch butterflies, two honey bees, and three bumble bees that made a visit.

You can grow them from seed but to do so you have to let the seeds be exposed to winter.  Iron weed is untamable in that way.  They are like us in that it is actually the harshness of the hard times of our lives that leads to periods of growth.  We can’t thrive spiritually with testing.

“Aslan is a lion- the Lion, the great Lion.” “Ooh” said Susan. “I’d thought he was a man. Is he-quite safe? I shall feel rather nervous about meeting a lion”…”Safe?” said Mr. Beaver …”who said anything about safe? ‘Course he isn’t safe. But he’s good. He’s the King, I tell you.”  ― C.S. Lewis, The Lion, the Witch and the Wardrobe