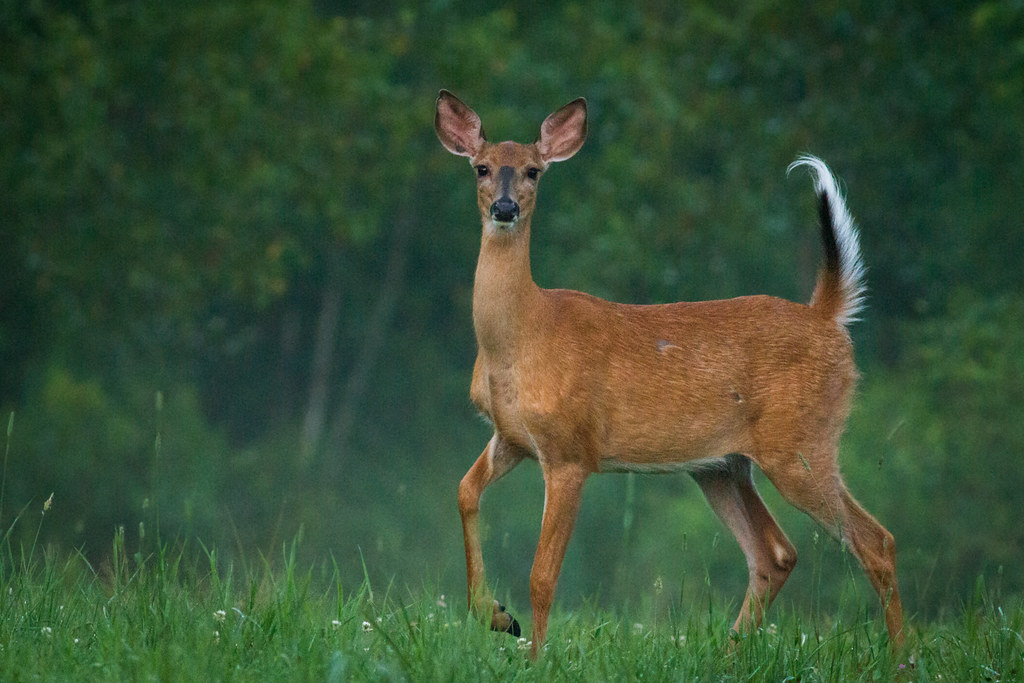 I caught the doe by surprise a couple of weeks ago.  I had awoken earlier than normal.  My wife refers to even to my normal rising time as ‘abnormal’.  Night was melting quickly into daylight although the sun had not yet shown itself on the eastern horizon.  The doe was about fifty yards off the road.  She was facing directly away from me; no doubt that helped me to go undetected.  She was feeding in shoulder-high grasses.

A wild deer never just puts its head down and grazes like a cow would do.  Instead, they grab a mouthful of grass and snap upright to attention; and then grab another mouthful.  Their large ears pivot and they constantly test the breeze for the scent of danger.  But my footsteps on the blacktop hadn’t made much, if any sound and the light morning breeze that was just puffing into existence was straight out of the west which didn’t help this deer at all in terms of detecting my presence; she would have needed a northerly wind direction.

I hesitated for a few minutes to watch her.  Her reddish coat looked sleek.  She was good-sized, so I knew she was probably at least two and a half years old.  She should have had a fawn, or more likely twin fawns with her but I couldn’t see any.  Either she was truly alone or the fawns just weren’t visible in the tall grass.  I resumed my walk, pausing once to look back over my shoulder to see if she was still there.  She was, but now her eyes were fixed intently on me.  I was a safe distance from her and walking away, so she seemed content to just watch me instead of running away, but she made sure that I posed no danger.

This morning I was just a bit later.  As I neared the place where I had previously seen the doe, I began to search the field for her.  This morning though she was also looking for me.  She crossed the road about 150 yards ahead of me and disappeared into the woods on the north side.  She was at a trot.  I stopped and kept my eyes fixed on the road ahead.  Sure enough, about ten seconds later, a fawn emerged from the ditch and followed the doe into the woods.  That first fawn just finished crossing when a second fawn emerged and hurried to catch up.

Of course, there was no way to prove this doe was the same one I saw two weeks ago, but it was nearly the exact same place and time of morning.  And there was no way to prove that these fawns were there – hidden from view two weeks ago, but I suspect they were.  It would be fitting that a second encounter would reveal more.  Truth does not change; it deepens.