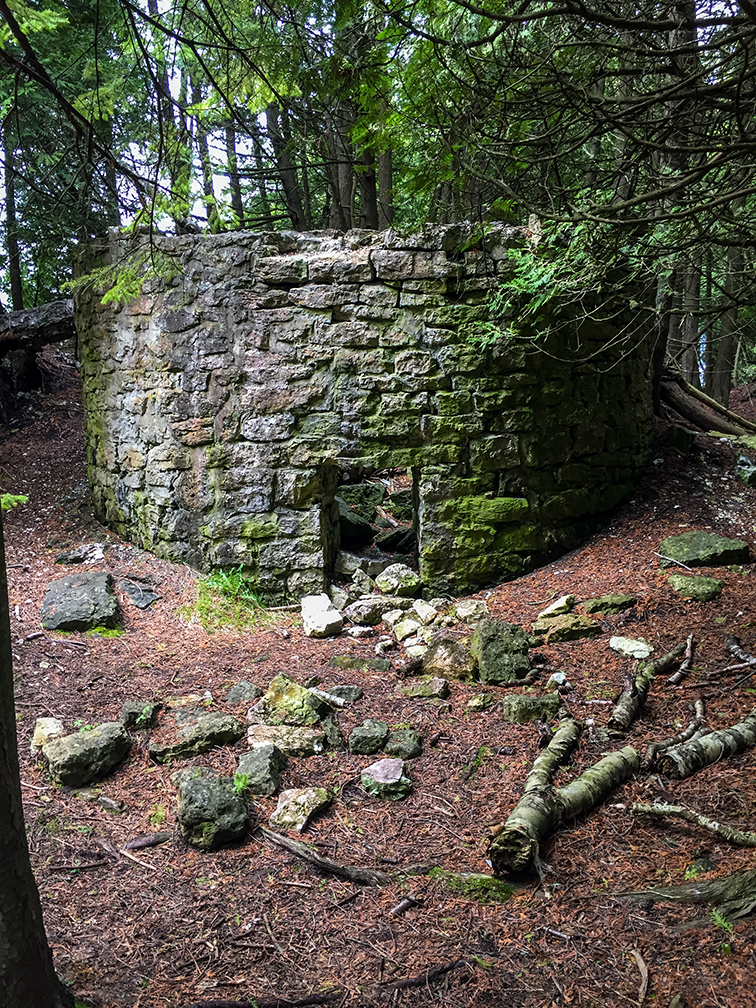 This past weekend, on the back edge of October and the front edge of November my wife Michelle and I went to Door County and hiked to the edge of the little peninsula that juts a mile or so out into Lake Michigan to form the northern rim of Bailey’s Harbor. It’s a place called Toft’s Point.

It was a level and easy hike in. Up high you could hear a strong steady wind tearing through the tree tops but the thick evergreen forest protected hikers. Down at trail level it was calm.

We came into a clearing with a large rock with a plaque that explains the history of this land. It was purchased in the 1800’s by Thomas Toft who had come to the area from lower Michigan to quarry limestone. The plaque explains that Thomas and his wife purchased the land and built their home and raised their children in this place; they were happy here. The plaque explains that the Toft’s wanted to preserve the area and refused to cut any of the virgin timber – the huge white pines that supported Door County’s lucrative but short-lived timber harvest era. Eventually one of the daughters donated the land to the public so that it could continue to be preserved enjoyed by us all.

After reading the plaque we hiked out to the shoreline and stepped out of the protection of the trees and into the full force of the strong off-lake wind. Seven-foot whitecaps curled and crashed against the limestone edge of Toft’s Point. We watched a bald eagle really struggling to stay aloft. Twice he came so close to the waves that it seemed like the water was going to pull him in, but both times he regained altitude. The last we saw him he was climbing higher and appeared to be headed for a safer fishing spot.

One of the interesting things that I noticed as we hiked around Toft’s Point was the fact that while the Toft’s wanted to save the big white pines there really are really very few that remain. In fact, we saw more chunks of what remained of white pines either still standing gray, barkless, and broken or laying prone on the forest floor – moss covered and slowly melting back into the earth than any living white pines. The area is still heavily wooded but the vast majority of the trees are hemlocks and cedar.

I recalled a talk I had years ago with the head forester of the Menominee Reservation who told me about how angry the locals would get when they would harvest stands of the big pine on tribal land. But he explained that the white pine needed to be cut back to allow adequate sunshine to the forest floor. Otherwise the large trees would kill off the understory, so that when they finally toppled over it was faster growing trees like aspen and maple that would spring up in their place. Ironically, to keep the pines healthy there had to be some harvest. On the Menominee Reservation they use mainly selective harvest but at times they do clear cut some acreage. Without that harvest the white pine forest eventually kills itself. At Toft’s Point, because the poor soil conditions it was the hemlocks and cedars that replaced the big pines that the Toft’s loved so dearly.