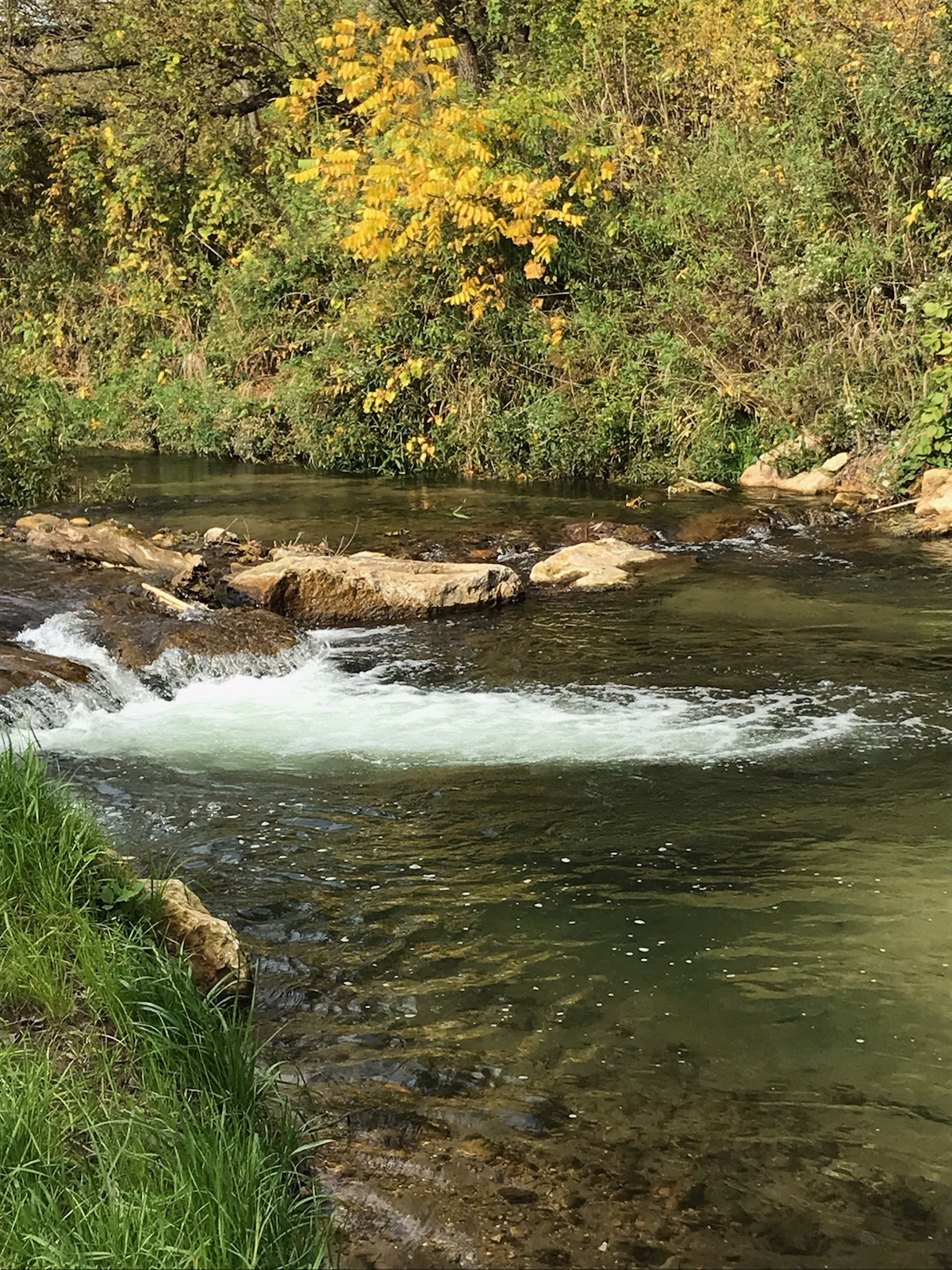 I recently retired and I knew exactly how I wanted to start this next stage of my life.  I rented a little log cabin near Viroqua, which is in the southwest part of the state.  This area is known as the driftless area because the succession of glaciers that covered what is now known as Wisconsin never made it here.  Here there are many ridges and steep hills.  The valleys, or hollows, almost all seem to have a clear spring creek running through them.  The creeks are full of native trout, mostly browns, but some brookies as well.  The fishing can be as world class as Wisconsin offers.

I had heard about the area as far back as several decades ago when I spent more active time with Trout Unlimited.  Several members spoke highly of the fishing down there.  But it is a long drive and I had my favorite streams in my beloved and well-known “up north”, so I never made it down there until about 5 years ago.  Once I discovered what my penchant for familiarity and “sure thing” had caused me to overlook all these years, I have returned each year to celebrate the end of the trout season.

In my younger years winter caused me to be most eager for May – the beginning of the season.  Even if the fishing wasn’t always that good, and the streams overcrowded, it felt good to be on the water.  Or rather I should say “in” the water.  A unique characteristic of trout fishing is wading the rivers and streams.  There is something about feeling of the push of cold water.  You learn to not fight the current so much as to let the stream take you in.

In those days I measured success by a full creel.  It was important to not only catch fish, but to catch and keep a limit of fish.  I used bait because it was the easiest way to get that limit.

By midlife I put off trout fishing until after Memorial Day.  I found that June was actually a better time as the fish seemed more active.  And by that time many of the people shifted their attention to boating and fishing the lakes as they warmed enough for swimming.  I shifted to just fishing with artificials.  The fish didn’t take them so deep and so most could be returned to the stream to live and fight another day.

Now in my later years I prefer my flyrod.  It’s more of a challenge.  A good cast almost feels as good as a good strike.  I have learned enough to have a feel for what they should be biting on.  And there is a greater connection with the fish because you hold the line directly in your hand, and so you feel each throb of the head and strong tug of a good fish.

They say that those who fish for trout do it as much for where they are found as they do for the fish themselves.  That is very true.  Whether it is the singing, surging brandy colored waters of the north – they look that way from the iron-stained gravel bottoms, or the gin clear and quiet meadow spring creeks of the driftless region, all streams and rivers twist and turn, never running straight for very far.  Each bend holds the promise of hidden discovery.  It’s a much different experience than fishing a lake that you can take all in from any spot on the water.

And the fish themselves are as beautiful as the waters they thrive in.  Especially at the end of the season because native stream trout spawn in late fall, so at this time of year the brookies have bright crimson sides and the browns are true golden.

I have learned through the years that the best really is the last.  Even in the driftless, at the end of the season I can have most any stream to myself.  If I find a vehicle already parked by the bridge I simply drive on to the next bridge.  I crave solitude when trout fishing.

This special retirement trip was near perfect.  The weather was a bit gray and the breeze was a bit cool.  But the fish were eager enough. The extra time I had for this trip afforded me the opportunity to try several new streams and stretches.  Most were places I will want to return to.  And while a hooked and landed lots of very nice fish, the biggest one I hooked got away.  That brown trout will be bigger in my stories than he likely would have been if I would have netted him.  And that fish reminded me of the most important lesson of trout fishing – you can’t lose something you never really had.