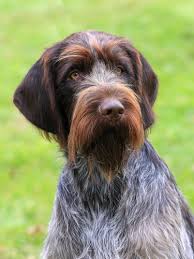 I thought long and hard about whether or not it was a good idea.  I hadn’t been back there in five years.  The past is past.  There really is no going back – it won’t be the same.  No, it certainly won’t be the same.

The place I was debating about visiting is a grouse and woodcock covert near Crooked Lake.  I discovered it about 45 years ago.  I hunted it alone for years.  I shared it with just a couple of trusted friends.  And I hunted it with Partner for a dozen years.

Partner was the only true hunting dog I ever owned.  It was his purpose in life.  He was a wirehaired pointing griffon – not a common dog.  Many would ask for a repeat, “He’s what kind of dog?”

He came from a good bloodline.  His instincts were better than my training techniques and we grew into each other.  Our times in the field were special.  I put a little bell on his collar when we hunted upland birds.  I could hear him working back and forth through thick cover ahead, but I only caught an occasional flash of movement.  The bell helped me keep track of him.

He was what is known as a versatile hunting breed.  That meant he would hunt a variety of game.  He would find it, point it, flush it and retrieve it if I was lucky enough to connect.  The classic pointing dog should hold steady and let the gunner flush the bird.  But we both agreed, Partner and I, that it was best if he did the flushing.

It wasn’t hard to know when he was on the trail of a gamebird.  His little bobbed tail would first begin wagging and then go faster and faster until it resembled a spinning helicopter blade more than a dog’s tail, as the scent grew hotter.  Then when he finally had the bird pinned down, he locked up.  He would hold the point until a positioned myself – not moving anything now, not even his tail.  He just rolled his eyes to keep sight of me.  When I was ready, I would give him a hand signal and he would plunge ahead, sending the bird up into the air.

The breeder I bought him from said that I would get nine good years out of him; he hunted hard for twelve years.  An extra blessing.  In year 13, quite unexpectedly, his front shoulder gave out on a pheasant hunt.  He couldn’t hunt heavy cover anymore as he would fall down repeatedly.  The vet said there was nothing to be done.

That last October the covert near Crooked Lake was the last time out.  I was quite content to just walk the logging road with Partner alongside.  He didn’t have to prove anything more to me.  Just one nice last stroll through the October woods together.  The first half mile was uneventful, but as we neared a granite outcropping a grouse thundered up.  I raised the gun almost automatically and fired.  Partner charged up the steep ledge to retrieve the bird.  It was a struggle but he made it.  As he brought the grouse to hand, he laid down, panting heavily.  It took about 15 minutes before I could coax him back on his feet.  At that point I knew that we needed to get back to the truck.  I reminded myself not to shoot if we flushed anything else.  That was Partner’s last hunt.

I filled my time with other pursuits these last five Octobers, but this year I felt the pull to return.  And so, this week I did.  I didn’t head right away into the covert where there would be a better chance of jumping something.  Instead I headed down the logging road that Partner and I had shared during his last hunt.  I recognized the same granite outcropping.  A grouse should have flushed there, but none did.  I didn’t hear the little bell again.  But the woods smelled good.  I lingered there until the cold gnawed enough at the back of my hands that I needed the warmth that walking would bring.  I recalled the words of Peter on Mount Tabor, “Lord it is good that we are here.”