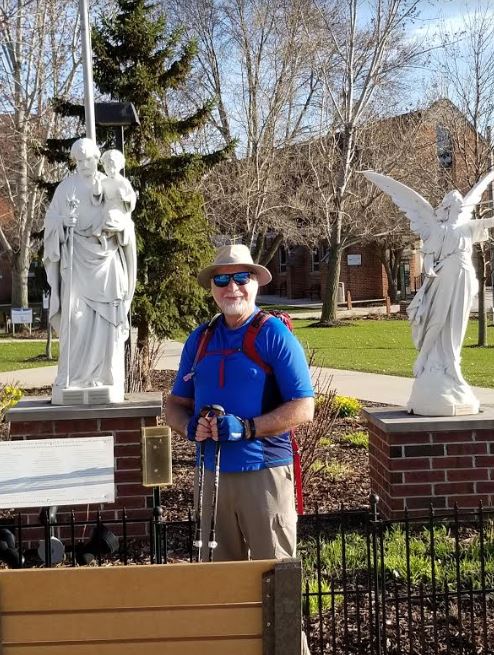 I am a cautious person by nature. I don’t just think about the next move – I prefer to think two,
three or four moves ahead. That’s why my wife refuses to play checkers with me – “You think
too much”, she says. In some aspects of life that trait has served me quite well. Sometimes
though when there is too much uncertainty in life, as with checkers, I just refused to move. I
have had many inspirational thoughts that I have pondered into nothingness. Second thoughts
can lead to doubt; second thoughts can be fatal to dreams.

I recognize that God continues to chip away at is this very aspect of my spiritual life. God wants
me to abandon myself to him. He has shown me this. He has told me this. He wants me to
give up what I perceive, foolishly most of the time, as control over my life. I must admit that it
scares me at times; it confuses me at times; and it has even made me angry at times. I’d block
it from my mind completely if I didn’t also admit that it excites me much of the time.

One of the methods that I have found works for me when God wants to take me deeper than I
want to go is public commitment. When I keep inspirations of faith within my heart time can
bury that secret forever. But those times that I have spoken my inspirations out loud – like with
my marriage vows, like with my promises at ordination are like taking the first step of the
journey. The first step is always the hardest.

When they announced that the annual Walk to Mary was canceled this year, I was inspired to
walk it as a solo pilgrimage. But I began to have second thoughts. I know from the five
previous times I made the Walk that despite training and good hiking shoes that my feet are
prone to blisters. I know I am going to be stiff and sore for several days. The initial allure of the
idea was wearing thin.

I meet with a small group of men every week. In the Cursillo Movement we call it a 4 th Day
Reunion group. We discuss where we encountered Christ in the past week, what we are doing
to deepen our study of the Catholic faith, and what apostolic action we took or plan to take.
We continue to meet weekly via video conference even in this time of ‘safer at home’.

Everyone in my group had been preparing for a Diocesan-wide consecration to St. Joseph to be
held on May 1 st . I hadn’t participated in the consecration because of some timing conflicts so I
had felt a little left out these past weeks as they had been discussing the spiritual fruits they
were already receiving in the preparation. During the call the Holy Spirit nudged me and before
I had time for a second thought I told them that I had been thinking about doing the Walk to
Mary on my own, but since I wanted to support them all spiritually I promised them that I
would walk on May 1 st , and that I would walk the route in reverse for them – from the Shrine of
Our Lady of Good Help to the Shrine of St. Joseph on the campus at St. Norbert College. There.
I said it out loud. Commitment. First step taken. Second thoughts overcome.

On May 1 st Michelle drove me out to Champion early in the morning. I had mentioned my plan
to Becky VanKauwenberg on the Quad Parish Staff and she surprised me by meeting me at the
Shrine. She said if I would send some pictures throughout the day that she would post them on
the parish Facebook page. People could join the pilgrimage virtually.

Every time I stopped to take and text her a photo, Becky shared prayer requests that people
had posted. All of a sudden, a planned solo walk intended to support my small men’s group
began lifting others up in prayer. When I stopped for my first rest I had to scroll down through
the growing posts and prayers.

Michelle walked out to meet me when I was about a mile away from SNC and she joined me for
end of the walk. It really helped to have her walk along with me. Shortly after I sent Becky a
picture of the statue of St. Joseph at the end of my pilgrimage, she sent me a screenshot of all
of the supportive comments and prayers of nearly 500 people who had participated virtually on
the pilgrimage. Amazing.

This is how God works. He can take our doubts, our hesitation, our uncertainty, even our
unwillingness and lead us through all of that into something much bigger than ourselves,
something much more beautiful than we could ever have imagined.

On the drive home I could feel rigor mortis setting in. Overworked muscles were tightening up
and stiffening up. I could feel my swelled feet aching. I told Shelly that I decided this would be
the last time I did the Shrine to Shrine walk. The next day, Saturday morning, I had my video
call with my 4 th Day group. I had a chance to tell them about my experience. One of the guys
said that next year he’d really like to walk with me. Whoa! – I wanted to stop him right there.
In my mind I already knew that there wasn’t going to be a walk for me next year. But on second
thought . . .