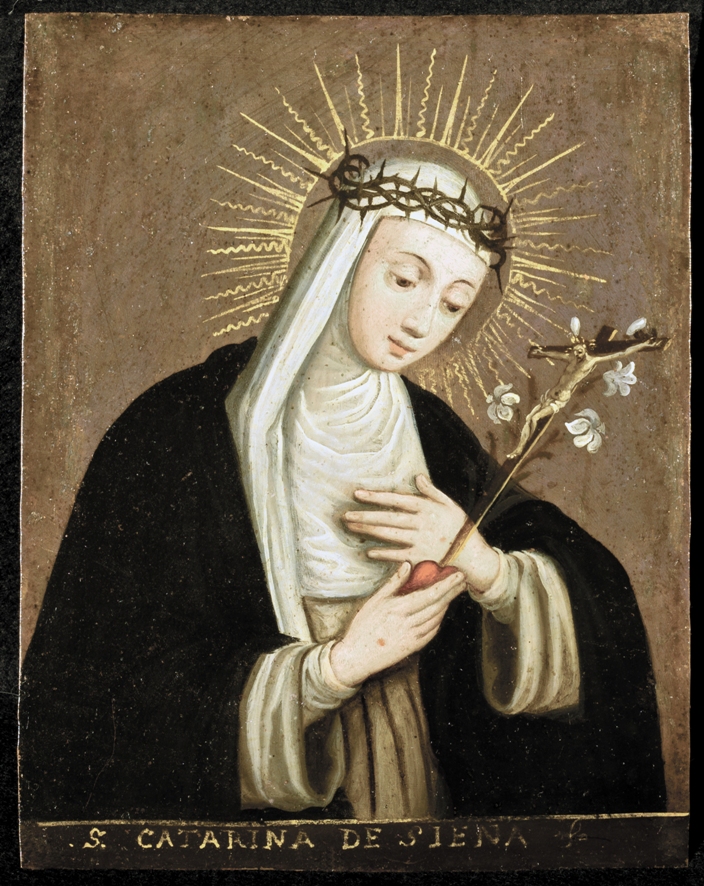 Writing this on April 29, I am overjoyed to see that this date celebrates the feast of one of the greatest role models for women (and men, of course): Saint Catherine of Siena. Catherine, a lay Dominican like myself, could be said to have been too holy for this world. For example, her mother, Lapa di Puccio di Piagente, was a holy-yet-necessarily-stern mother of at least 13 children. When Lapa once scolded her daughter with harsh words, Catherine replied “I beg you not to let your tongue damn anyone, whether they be good or evil, for my sake. It is unseemly at your age, and it hurts my heart.” Additionally, she taught herself the Angelus at the age of 5. When she would climb the stairs, she would kneel on each step and say a Hail Mary, and at the age of 6 she had a vision of Christ Jesus—the first of many such visions.

When she revealed to her pious parents that she had devoted her virginity to the Savior, they were not too happy. To show her how difficult a life of solitary living could be without a husband’s aid, they cast all their chores upon her shoulders. Not once did Catherine complain of her work, as “she used to imagine that her father was our Lord Jesus Christ, her mother was His mother, the Virgin Mary—this must have been rather difficult for Catherine when Lapa was in one of her furies—and her brothers & the apprentices were the apostles & disciples.” (Undset, p. 24.)

Eventually being allowed to join the Dominican laity, Catherine grew in wisdom and frequently engaged in ecstatic conversations with familiar names: Mary Magdalene, Dominic, the Blessed Virgin, and her Divine Son. Mamma Caterina, as her enraptured followers affectionately called her, is considered one of the greatest mystics of the Catholic Church, and her Dialogues with the voices of heaven are a tapestry of insight into the Heart of Christ. (If anyone wants a copy, send me an email and I can print them for you.)

Knowing her status, both socially and spiritually, she nevertheless set out on a perilous journey for France when, during what was called the Babylonian Captivity, the popes were held hostage in Avignon, France, for 67 years. Having no formal education, she successfully debated countless bishops and cardinals who were hostile to the notion of the Pope returning to Rome. They were stunned at her spiritual insight and utter purity. Ultimately, “Jesus Christ’s words to Catherine many years before, when He said to His bride that He would use weak women as His ambassadors to the proud and powerful men of this world, had come true in a manner which makes Catherine of Siena’s destiny astonishing in the history of the world.” (Undset, p. 212.)

Let none of your characteristics that some may see as lesser—your age, gender, Catholic faith, or your knowledge—prevent you from carrying out the tasks entrusted to you by Our Lord. Leave worldly expectations behind as you seek the heights of heaven, my friends.

Saint Catherine of Siena, Doctor of the Church, pray for us.