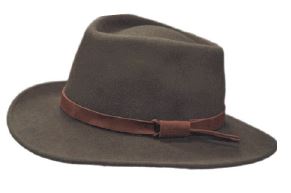 I recently reclaimed my felt hat.
I have a soft spot in my heart for tradition. I grew up with a love for the outdoors and as a kid I would devour Sports Afield and Outdoor Life each month when they showed up in the mail. And still today, Gordon MacQuarrie is a favorite writer of mine. I have read and reread his Tales of the Old Duck Hunt-ers each year. Even to this old English major I consider them every bit as much of required classic reading as Shakespeare. I’m pretty sure it was in the pen and ink sketches in MacQuarrie’s books that made me want to buy the felt hat in the first place. It just felt right to wear it whether paddling, or fishing or grouse hunting.

But my felt hat was “appropriated” by grandchildren a number of years ago. As I recall it was as close to a cowboy hat as they could find during an imaginary “Wild West” weekend. The hat got tossed into the toy bins during clean up. So the last few years it would appear from time to time on various grandchildren during those games of pretend. Meanwhile I resorted to a collection of various baseball-style hats for my hunting and fishing outings.

But recently when I was home alone & packing the truck for end-of-the-season expedition to the trout streams of the Driftless region of southwest Wisconsin I had a moment of inspiration and went upstairs to the “play” room and dug through the bins until I found my felt hat. OK, so with no one else around it wasn’t exactly a bold move, but I did chuckle somewhat smugly as I put it on & climbed in the truck.

The fishing during my two-day excursion was fantastic. In fact, I had to “retire” one fly during the afternoon of the second day because it had been so chewed up by trout that it was beginning to unravel. I tucked it in the hatband of my felt hat. It looks “right” there. When I got home the felt hat was stashed with all of my fishing gear; I did not return it to the toy bin.

This would be a good time to think about where your faith life is at. Did it ever make it out of the toy bin? Have you given serious adult time and adult effort into deepening your experience of God? Is your faith based only on tradition? Maybe you do what you do in regard to your faith life because that’s what you were taught; it’s what your family did. Tradition can be a blessing and long as at some point you claim your faith as your own and you live it out in a way that is meaningful to you. Maybe you lost your faith along the way or you misplaced it or someone or something else caused you to forget about it. You can find it again and reclaim it with God’s help. Hopefully your faith life is part of your everyday experience; it looks good on you because you are growing closer to God and closer to living your life as one made in God’s own image.