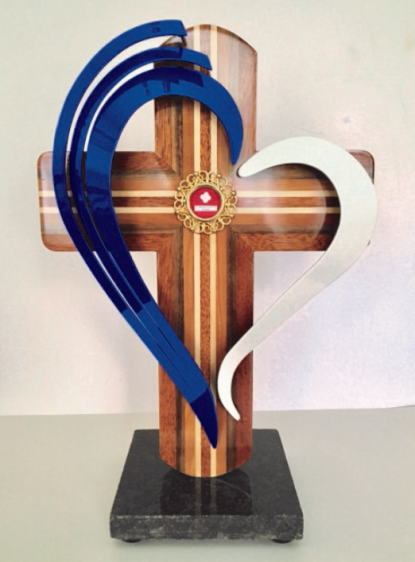 We have been blessed to receive a first-class relic of St. Teresa of Calcutta (Mother Teresa). As Mother Teresa’s body was kept entire, the number of first class relics is limited. Through the movement of the Holy Spirit, this relic was gifted to the Quad Parishes so that the relic can be made available in the Church for veneration by the faithful.

There are three classes of sacred relics. The first-class is a part of the saints body. The second-class is a piece of the saints clothing or something used by the saint, and the third-class is an object which has been touched to a first-class relic. A relic is like a keepsake, a tangible reminder that the saint was human yet heroically lived a life of holiness. Relics are kept in a reliquary. A beautiful reliquary was hand crafted especially for this relic owned by the Quad Parishes.

This reliquary was inspired by the design of the reliquary that is used by the Missionaries of Charity which is the order Mother Teresa started. The large cross of the reliquary is made of wood taken from each of the four churches of the Quad Parish. In the center of the cross is the relic of Mother Teresa, sealed in a gold case. The relic is surrounded by two sweeping bands that form a heart of blue and white, recalling the sari Mother Teresa adopted as a habit.

The relic and reliquary were blessed and placed in the Blessed Virgin Mary cove in the back of St Joseph Church on Sunday, Oct 6th.